A quarterly bulletin facilitated by your membership of the Rural Services Network and produced in partnership with the Rural Housing Alliance, highlighting a selection of current rural housing issues and opportunities

The main theme of Rural Housing Week 2018 was to demonstrate the positive value of housebuilding in rural areas, and to show how building affordable housing is helping rural communities to survive and thrive while notions of NIMBYism are becoming outdated.

Isolation & loneliness, innovation and the impacts of demographic change were secondary themes to the week which, yet again, proved a huge success in emphasising the positive difference which is being made all the time by members of the Rural Housing Alliance, local authorities and others in addressing local rural needs. This month’s edition of the Spotlight highlights a number of these recent success stories.

Coverage of the housing crisis all too often focuses on our towns and cities, principally those in London and the South East. But unaffordability, and the problems it causes, are not isolated to urban areas. This is the conclusion of a recent report published by the Institute for Public Policy.

“With housing policy now near the top of the political agenda, and reviews on social and affordable housing being undertaken by both major political parties, there is now an opportunity to make the case for a tailored approach to delivering the affordable homes that rural communities need. In light of the UK’s decision to leave the European Union, there is also a need to rethink rural policy more widely, creating an opportunity to put the delivery of affordable housing at the heart of a new rural agenda.”

This report sets out a series of policy solutions which aim to allow rural communities to build the homes that they need and ensure that the English countryside isn’t just able to survive but thrive. You can view a copy of the report via this link.

To have value, the 5-star plan needs to prove what impact it has as a stand-alone ambition and through associated activity. This review one year after the launch is designed to highlight some of this value. Although at the time of drafting this update figures are unavailable, indications are that over the past 12 months the level of affordable rural housing completions has increased as has the level of investment into rural housing from Homes England.

During the early stages of developing the 5-star plan, housing associations and rural organisations were consulted on what the main challenges would be to delivery. Together the Rural Housing Alliance and National Housing Federation have sought to tackle these and a summary of these details is available via this link.

Two homes for affordable rent and four for shared ownership are being built, along with five for open market sale, and all will be offered to people with a connection to the village.

Representatives from East Northamptonshire Council and NRHA’s partners, Orbit and RDC, came together to celebrate work beginning at the site, which is NRHA’s first development in Little Addington.

Craig Felts, Company Secretary, explains: “Our small-scale affordable developments, such as Little Addington, offer a lifeline to local people.  Our work is driven by local housing need and a commitment to house those who are unable to compete on the open market.”

Every person in the 11 homes which have been built by Broadacres in Oswin Grove, Gilling West, near Richmond, has a connection to the village, either because they originally come from the village, or they work in the surrounding area.

They include Irene Nichol, who is renting a two-bedroom home. The grandmother-of-seven has lived in Gilling West for the past 11 years. She said: “My family live in the area and I have horses stabled on the outskirts of the village, so I was keen to remain in Gilling. The one-bedroom property I was renting privately had become expensive to maintain as I needed to pay for electricity for the central heating and coal/logs for the fire, plus it was difficult when one of my grandchildren wanted to stay over.

“I have lived in older properties all my life and never thought I would want to be in a new one, but I can’t see my going back now. I pay only a little bit more in rent each month but for that I have a much bigger house with a guest bedroom and I think I will actually end up saving money on heating as the new house is so much more efficient. It feels like I have died and gone to heaven.”

Broadacres worked in partnership with Richmondshire District Council and its contractor Esh Property Services to build the homes on the site of the former Oswin Grove sheltered housing scheme, in the heart of the village. The scheme was demolished in 2015 after being affected by flooding.

The homes on the new development have been built at a higher level so they will not be affected by any possible flooding. This is in addition to the flood alleviation work that was carried out in the village a few years ago.

The total cost of the development is £1.64 million, which includes a grant of £352,000 from Homes England. Gail Teasdale, Broadacres’ Chief Executive, said: “Working with our partners, we are delighted to have been able to provide much-needed affordable homes for local people in a popular village where the cost of renting privately or buying outright is high. During the initial consultation process, people living in the village expressed a desire to see more family homes and to ensure any development is in keeping with the area. We have responded to their wishes and have delivered a scheme which adds great value to the village.”

Amanda Madden, Rural Housing Enabler for Richmondshire District Council, said: “This development provides an affordable option for local people who want to remain living in Richmondshire and this scheme is a great example of what true partnership working can achieve.” 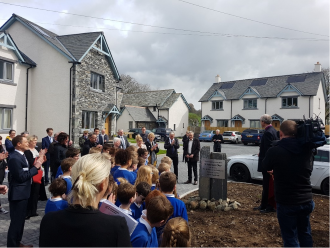 Mitre Housing Association’s 10-unit scheme in the centre of Coniston offers much needed affordable housing in the heart in the Lake District, where second-home ownership and holiday homes dominate the market.  All of the units have been let to local individuals and families who were in affordable housing need.

The scheme inception was in 2014 when the Diocese of Carlisle proposed to sell their youth centre on the open market.  Mitre carried out a feasibility study for the scheme and made an offer for the site which, after negotiation, was accepted.

The Bishop of Carlisle opened the scheme in April 2018 and local primary school children wrote a poem to mark the occasion. The Rt Revd James Newcome, Bishop of Carlisle, said: “I am a huge supporter of Mitre Housing Association and I am delighted that they have been able to secure this site at Coniston. It was always our stipulation that, after the Youth Centre closed, this site should continue to serve local people through the development of affordable housing.”

Part of the youth centre was refurbished to create four of the new homes.  The original hall was demolished to make way for the new build units and part of the former car park was also utilised.  The slate from the hall was re-used in the new development allowing Mitre to design properties with features that were in keeping with the Lakeland surroundings.

All properties were fitted with solar PV panels to increase renewable energy on the site and reduce the running costs for the households.

The Parish Council currently provides financial support to the local Hamdon Youth Group which is aimed at the younger generation.  Since the inception of the group, anti-social behaviour in the village has significantly reduced and the young people are demonstrating pride in belonging to the village and joining in supporting events.

Part of the council grant supports the employment of a professional Youth Worker to provide key support on such topics as drugs, alcohol, gambling, and relationships as well as structured recreational activities. The Parish Council have recently been asked if it would support the employment of a second Youth Worker as the group has grown in size to over 60 young people and the annual grant now totals £5,890 to the Group.

St Andrews School, Cullompton, also benefited from the Community Fund. The Society has a total of 41 properties in Cullumpton and many of the primary school children attend St Andrews School. The School has recently been  extended to be able to accommodate the additional children from the expansion of the Market Town in Mid Devon and it held its official opening on 3rd July 2018. 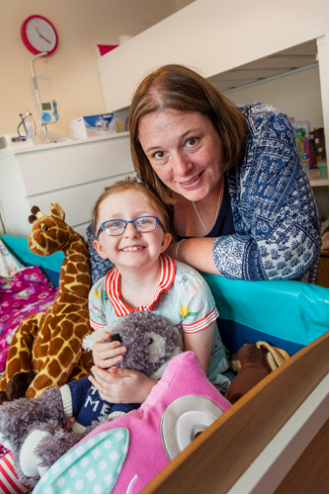 The Roberts family, Helen, Ian and their five daughters, moved into their new purpose built home last year, following completion of 55 new homes in the rural village of St Martins, Oswestry, by The Wrekin Housing Trust.

Martha, is a bit of a star; she has been recognised by West Mercia Police with a good citizen award. Like many children she loves giraffes, drawing and playing with her sisters. A neuro-muscular disorder physically affects her body in many ways meaning she has various support needs and her symptoms become progressively worse over the course of the day.

The four bedroom bungalow features a family kitchen and lounge area together with a wet room which is kitted out with specialist equipment to assist Martha with her day to day needs. Designed to be fully accessible for wheelchair the property has everything in place to enable further adaptations such as hoists in the future if required.

The family’s previous three bedroom home had an upstairs bathroom and didn’t offer Martha the space to use her wheelchair, which meant she had to be physically carried upstairs to be washed.

Mum Helen says; “This bungalow is simply amazing for us all. It has given me and the family immense peace of mind. I was worried that Martha’s room would feel clinical but it doesn’t at all. The wet room has been such a blessing and I know that whatever happens in the future we have a home that can adapt and cope with any changes. Martha’s health has improved since our move mainly due to lessening physical demands of the property”

Martha says of the move; “I now have the best bedroom ever and enjoy sharing it with my sister. I love it in here and having two bathrooms means I don’t have to wait anymore!”