Climate change and forestry: the time for action is now

There is now a convincing body of evidence that we are facing a climate emergency. Planting and managing trees, forests and woodlands so that they are fit for the future must be part of our nation’s response.

Growing trees removes carbon dioxide from the air, and stores the carbon in wood products throughout their life. Trees can also help to manage the risk of flooding, and provide shade and cooling benefits. They are a renewable source of energy today, and a sustainable raw material for the future bio-economy.
From: The Forestry Commission: Managing Woodland: Position Statement.
https://www.gov.uk/government/publications/climate-change-and-forestry-position-statement

Alan is a highly respected member of the community in Coquetdale, Northumberland. He was honoured with an MBE for his environmental and community work in 2000. He spends his time growing and working with willow, walking, and planting trees. Alan has been recognised at many levels for his achievements in industry, education, and the environment.  One award, from the Lindbergh Foundation, says: ’The human future depends on our ability to combine the knowledge of science with the wisdom of wildness’. Alan’s life exemplifies this philosophy.  Since 2005 Alan has been planting trees in Northumberland. He helps neighbouring farmers and landowners by planting shelter belts, avenues, and hedging.

In the Autumn of 2018 a large Ash tree on a local road blew over in a storm. The fallen tree caused a lot of damage. Alan began hedge replanting where the tree had fallen.  He planted 5 Norway Maples in the new hedge sections to replace the fallen Ash. Reporting back to the Parish Council, the members all agreed that hedge and tree planting was something they should be doing more of. They learned that the entire woodland ecosystem plays a huge role in locking up carbon, including the living wood, roots, leaves, deadwood, surrounding soils and its associated vegetation. Tree planting was something positive that the PC could advocate and be a leading part of. 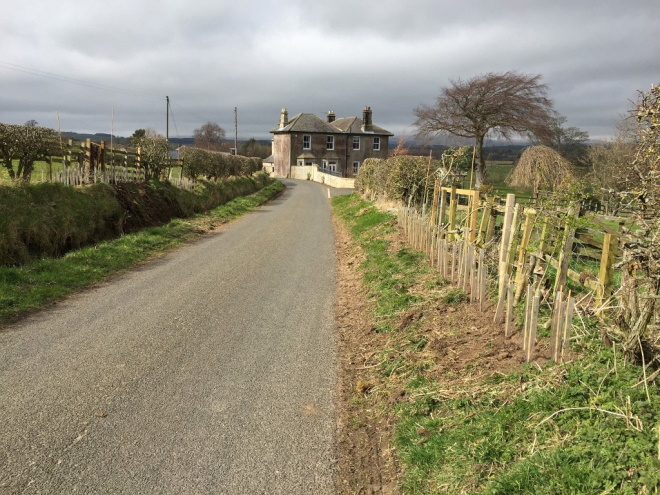 Alan began to note the areas of derelict land and areas where the road verges are very wide. He identified potential spaces to plant, subject to certain criteria, such as: whether the verge was wide enough to accommodate the trees, distance from overhead lines, and so on.

A plan was discussed by the Parish Council, and they agreed to take direct action to help to combat climate change by planting trees in the areas identified by Alan.

As part of his Parish Council work, Alan submits reports regularly about the highways and footpaths within the parish to Graham Bucknall, Northern Area Highways Manager, at Northumberland County Council. Graham and Alan toured the area to look at the sites which Alan had proposed. Graham gave the go ahead to this project and has been very supportive of the initiative.

Alan has been helped and supported by a team of volunteers, notably Jane Cheadle. The pair have been out in all weathers and conditions, checking on newly planted trees, weeding and planting. 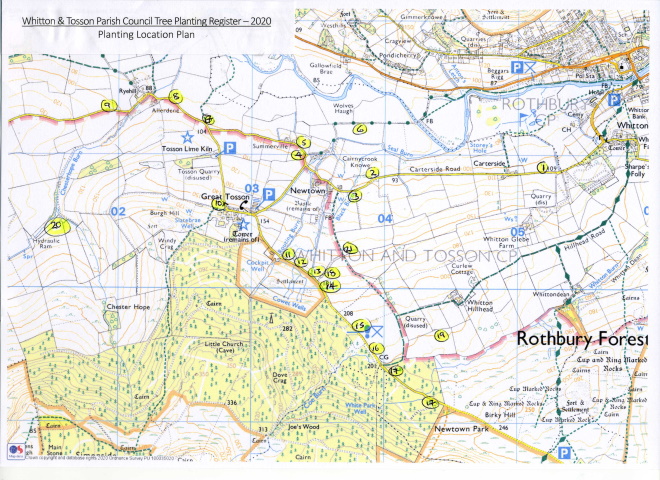 Where do we get the saplings?

The trees are grown from seed. They are grown by volunteers who are helping with the project. And, wonderfully, many people donate tree seedlings which they have carefully nurtured. The team also transplant seedlings from where they have self-seeded in a less advantageous place to a more beneficial location. Cell grown trees are also purchased, from http://www.cheviot-trees.co.uk/. This company has been very helpful in supplying a variety of appropriate trees for our areas. They are not expensive; costing around 40-50p each. The expense comes with the need for tree shelter accessories. Fortunately, kind residents have donated copious amounts of these which has helped enormously with the costs of the project.

Where many people have donated benches in our area, we are now encouraging folk to think instead about donating to plant trees in memory of loved ones. Jane was very happy to purchase and plant a group of birch trees to commemorate family members who have passed away (Jane’s maiden name being Birkett, which means ‘Birch’). By donating towards the purchasing of trees, residents can be sure they are helping to minimise the impact of climate change for future generations – as much as in memory of those who have gone before us.

It is a great delight when nature decides to plant her own trees, of course. Recently, when Alan and Jane were clearing weed growth from around recently planted Grand Firs, near a Noble Fir, on Simonside, they found a dozen tiny Noble Fir Seedlings growing in the bare earth. This can happen when the seeds take root on disturbed ground. Presumably, the weed clearing activity has promoted this hopeful new growth.

If you would like any further information about this project please contact Alan Winlow MBE
Vice Chair, Whitton and Tosson Parish Council
Northumberland alan.winlow@gmail.com